The 2019 Absa Cape Epic route has been revealed!

Eight days, 624 kilometres and 16 650 meters of climbing – the bare statistics tell less than half the story. Rugged mountain trails, bone jarring dual tracks, windswept gravel roads and, yes, sand lie between the Prologue at the University of Cape Town and the trail to the Grand Finale at Val de Vie Estate. This is a reflection of modern Africa, where urbanization spreads to the edge of wilderness – riders will roll out of celebrated towns, straight into the hinterland where heaven and hades are the opposite sides of the same coin. 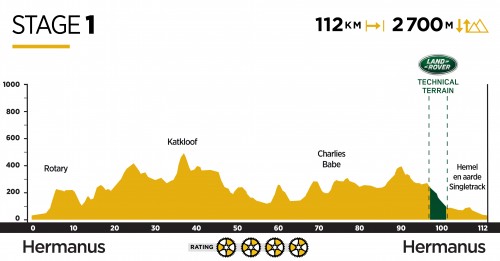 Heaven and Back to Earth

Relentless. Attritional. A return to the Absa Cape Epic Stage 1’s of old and the Hemel en Aarde Valley. Rotary Drive, the La Vierge stairs and the Paddocks set the tone for a day of relentless ascents before the day’s first spectator point at Creation Wines. Then it is onwards and upwards towards the Dimension Data Hotspot near the summit of the Katkloof Climb. Baked by the summer sun it will be littered with loose pebbles, clinging precariously to a shifting sand surface. In the wheat fields of Overberg, rolling roads provide momentary respite before the war of attrition resumes on the slopes of the Babilonstoring Mountains, then descending into the Tesselaarsdal Valley – where in 2017 many an Epic dream was dashed. Turning for Hermanus and home it is downhill in theory – but reality and Charley’s Babe have other ideas. The Gorge, in the final fifteen kilometres provides the day’s Land Rover Technical Terrain and one of the most exhilarating approaches to an Absa Cape Epic finish line yet. There is still one final sting in the tail though; the Water Works climb, designed to bring a tear to eye of those who failed to prepare.

A teaspoon of cement is in order for the first move day of the 2019 Absa Cape Epic, as it packs challenge after challenge into its relatively brief 86 kilometres. Tyre choice and pressure are sure to be decisive on Stage 2 where 10 arduous kilometres within the first half of the day could prove definitive. The stage starts with an ascent of Rotary Drive before crossing out of the Hemel en Aarde Valley to the west – into the sandman’s playground. Dubbed The Machine, for the mysterious landowner known only by that moniker, it provides a steep ascent followed by the day’s Land Rover Technical Terrain, a rollercoaster ride along a trail carved out by motocross bikes. The key point of the stage is a brand new singletrack, cut into the Hottentots Holland Mountains by Wildekrans’ Braam Gericke. This 6 kilometre long climb gains over 500 meters in elevation and has been named the Wildekrans Tokoloshe.

For more on the Absa Cape Epic visit the official website at www.cape-epic.com.